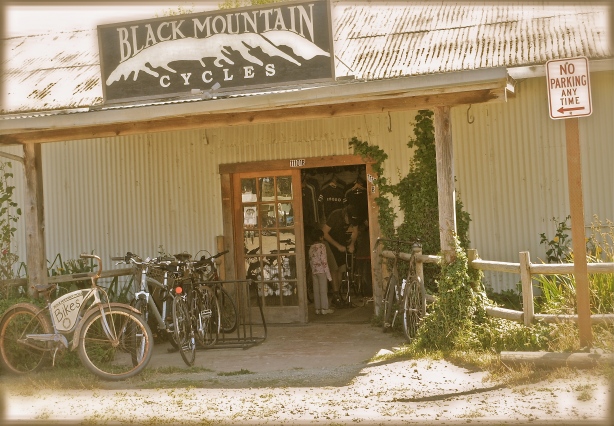 The End of the Search Brings Me Back Home
(Photo Credit: Deborah Parrish)

It was a small thing, really. An object that blended into our everyday world. A small titanium hand in a halfway grip that hung from My Music Man’s keys. He’d had it for many years – long before I knew him. It was a gift to him to buy his patience. He tells the story about ordering a special mountain bike years ago. It was a hand-made treasure from a local company called Ibis. The delivery of his precious bike had been delayed and he was salivating, itching to get it, get on it, and get up that mountain. But, instead, he was handed the “Hand Job” as a pacifier and a bribe.

That was April 1998, and mountain bikes were a personal thing, more than any other vehicle like a car or a motorcycle. Truly, mountain biking is like a religion; it gets in your blood. I only understand it from afar as I’ve personally only tried it once and as told by the witnesses, it was an utter failure. It was frightening, and let’s face it, I’m a hiker, preferring to keep my two feet on Mother Earth. I never made it up the mountain, stuck to easy horizontal surfaces with few rocks. But, that’s another story altogether.

He hung it on his keys and there it stayed for over a decade. He loved it, used it to pop off beer caps. It was always a source of commentary to newbies, those who wondered what the heck this thing was…he would tell the story and smile as he popped another cap.

I knew he loved it. And the stories of the Ibis bikes are legendary in the mountain biking circles. Just knowing that would hint that this small object was irreplaceable. It had been made by the company as a tchotchke in its early years and given away at trade shows. He was lucky to still have his after all these years.

The moment I realized that it was among the stolen items from my purse a few weeks ago was visceral for me. I was still recovering from the magnitude of the list of lost personal items, as well as the resulting identity theft. The thought that pushed through my brain carried a heated, searing, shaft of sadness. I didn’t tell him then. I waited. He had been through enough already.

It was over a day later that we were out running errands, trying to repair the damage of the theft together. The weather was beautiful, we had found laughter again, and were treating ourselves to lunch. We were happy, things were light. So, I decided to tell him. “Do you know what else was in my purse?”

He looked at me quietly. His face reflected the question, but not the answer.

I pushed further. “On your keys…”

Oh god. He knew now and his face sunk. I was so sorry and it all came rushing back. We immediately got online to find virtual comfort. Maybe there was a source to replace this? Perhaps there was an underground market for such things. Ebay had one for sale (in retrospect it was probably his), blogs discussed them, there were stories and photos. We somehow felt better.

In the midst of the more important aspects of the crisis, a couple of weeks passed before it popped onto my radar again. Late one night I was ready to tackle replacing the Hand Job for My Music Man. It would feel good to find another one for him.

But, it was too late for Ebay; that one was gone. The blogs were interesting and provided more fuel for my fire, but I could find no place to buy the replacement. In fact, the “word on the {virtual} street” was that these things were highly prized and fetched a fine sum, IF you could find one.

I woke up earlier than usual the next morning and began to make phone calls. I started with the Ibis Customer Service phone number and told my story. I could hear the smile-laced voice at the other end of the phone. “No,” he said, “We don’t have any. I mean, the people who may have one around here keep them as part of their own personal stash, you know?  No one would part with theirs. Sorry.”

Disappointment. {Sigh} “Okay,” I replied. “Could you give me anyone who might have one, might know of a person who would be willing to sell theirs?”

“Hang On, I’ll ask around real quick…” Upon his return, “Try this guy…”

And so it went for a while. One call led to another as I traversed the country’s telephone lines searching for a little titanium Hand Job.

Finally…”Well, you know, there’s this guy in Lincoln, Nebraska who collects mountain bikes and other trinkets. He’d probably have a few, or could point you in the direction…Good Luck.” And so I was tossed to Nate, at Monkey Wrench Cycles.

While Nate didn’t have one himself, he understood my plight and suggested I call his buddy, Mike Varley, at Black Mountain Cycles, in Point Reyes Station, CA. And this is where my search ended, literally 17.4 miles from my front door. I had travelled the country back and forth for about an hour that morning to find myself right down the road again. Mike was kind and extremely helpful. He said he knew the guy who had originally made the little gadgets. He’d reach out to him and see what he could do.

His next communication was in an email. “Good News,” he wrote. That was all I needed to hear. We’ve exchanged emails and arranged pricing, the Hand Job may only be a replacement, but it’s story is powerful: Never Underestimate the Power of your Network. A huge thanks goes out to Mike, and we even stopped into his sweet shop off the main drag in Point Reyes Station to meet him face-to-face. He’s won a customer for life – My Music Man and I are forever fans. You can’t buy that kind of loyalty, you can only earn it. Pay attention, fellow business people. This is one for the books.

And most importantly, My Music Man’s new Hand Job will carry with it this Happy Ending.

It’s not the size of your Hand Job….
(Photo Credit: Deborah Parrish)

I create to feed my passion. I'm a dreamer, a muse, a mother, a lover, a friend. I'll likely make myself available for an adventure, especially if travel is involved. My passions are many, but my heart is steeped in music. I'm not a musician myself but I consider music a form of worship. I also adore food but I'm not a chef. You'll usually find me in the background cheering and begging for more...the encore. Encores mean just a couple more tunes, or a second helping. Or maybe just dessert.
View all posts by Deborah Parrish Author →
This entry was posted in Happy Endings and tagged Customer Service, Mountain bike, Network. Bookmark the permalink.