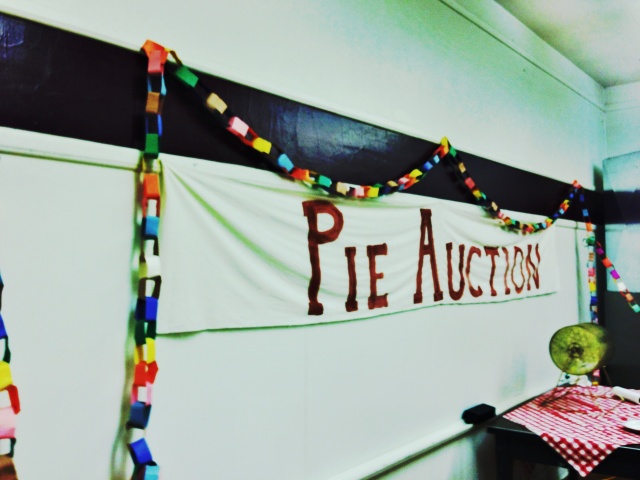 There are Pie People and there are Cake People. My Music Man and I are confirmed Pie People. I simply love pie. I’d rather have pie than cake. It’s not just a matter of taste, it’s a matter of substance. Pies are efficient, pies are practical. Cakes are fanciful. All that icing seems like such a waste. I know there are those who would argue this point, but I’m solidly sure of where I stand.

Tonight in our little corner of the world, the “Academy Awards of Pie” went off without a hitch. The Annual Live Pie Auction served up thick with slices of cheesy Americana. It just doesn’t get any better than this. In our small town, homemade pies are treasures born of hands in dough, fresh fruit from back yards, baked with love, and decorated for those of us who understand the fine art of pies. 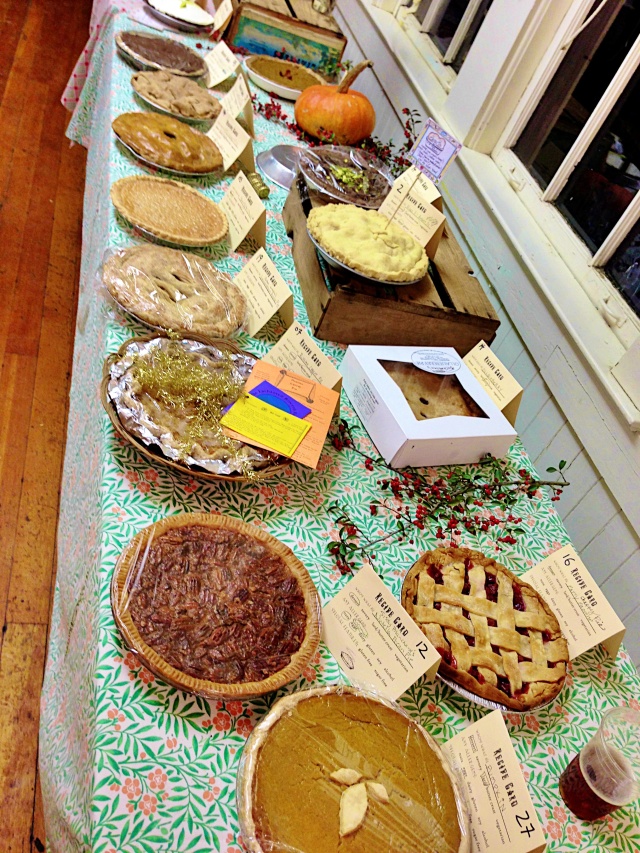 27 precious pies were auctioned off to raise money for the local Valley Ford Volunteer Fire Department. Even though it was our neighboring town, Valley Ford, that hosted the event, in our neck of the woods, anything within 10 miles is local. The little schoolhouse filled to the brim, shook with such a ruckus in the back that the auctioneer had to tell us to “Shush” so he could hear the bids. Unaware of all the back room deals, he only sensed the behind the scenes cahootin’. Those of us standing in the back like vultures were eying the pies on the back table, strategizing, how to get our prized pie, knowing there was competition, knowing they were strategizing, too.

This will be gone by morning.
(Photo Credit: Deborah Parrish)

We had chosen two pies. Each with its own unique winning strategy. 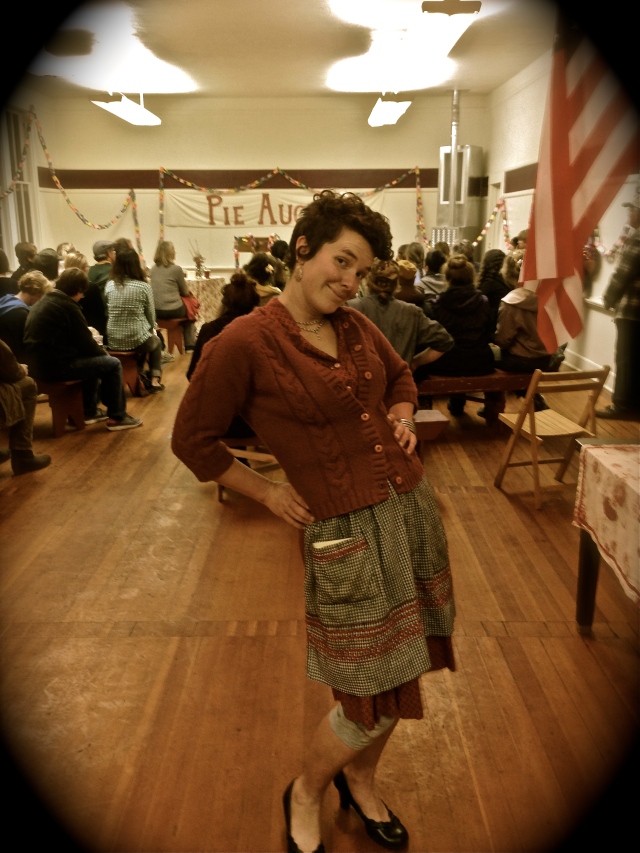 The first pie was ours. Strike fast, strike early. The bidding had yet to really get heated up so we were thrilled when the pumpkin pie went for a mere $17.50. What a deal. We had won The Stolen Pumpkin Pie. The pie maker confessed that the pumpkin used for this pie had been stolen from her neighbors yard…”Well,” she said coyly, “It was almost in my yard, so I took it and decided to use it for a pies.” The neighbor, sitting patiently on the long bench, didn’t seem to mind, seemed to say with his quiet smile, “Yeah, it’s okay, I had enough pumpkins, anyway…” I suspect he received his own pie in exchange for his silence. 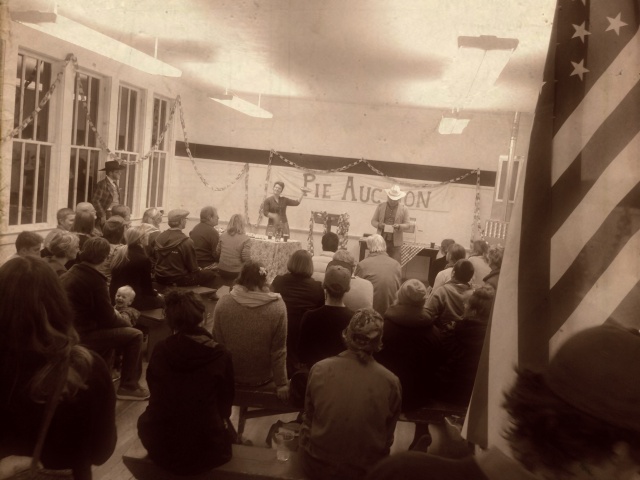 As the pies rolled by, the bidding became heated reaching a feverish pitch. At one point, the auctioneer sold a very special ginger pumpkin pie for $115.

This development brought me to the edge of my seat. I had my eye on a three berry pie, a gorgeous “peek-a-boo” cut crust, sprinkled with sugar. This beautiful pie had been saved for the final round. It was one of the only berry pies, rare among all the apple, pear, and pumpkin pies. We were sure to be outbid.

The bidding commenced and after some active volleying, we won the prized berry pie for $50. I don’t think I’ve ever paid that much for a pie before, but it was going for a good cause…and it was beautiful. I was happy, I had won my pie and was looking forward to eating it.

Earlier in the evening, as the auction began, my Music Man met a couple from Alaska on a cross-continental bicycle trip heading for Argentina. They’d just happened upon the Live Pie Auction while on their journey. It turns out they had also been eyeing the triple berry pie. After we won, my Music Man informed me that not only did they have designs on that pie, had lost the bid on it, but the day before had been the guy’s birthday…so, what could we do? We cut the pie in half and presented it to him unflinchingly. We couldn’t let him go without some pie for his birthday. The look on his face was priceless, and it felt good in our hearts, too. Pies are made for sharing.

It’s not about the food, although the food is wonderful – fresh ingredients, together with a priceless home-made, lusciousness. We didn’t come to compete for the pies, provided through the generosity of our neighbors and friends. We came for the sport, for the warmth and to support our local folks, and we came away with so much more – precious moments overflowing with laughter. For some, it was the pumpkin, others, the apples or the pears, a few craved the berries, but we gathered tonight to pay homage to the pies of the season, to celebrate that which is better than cake, an abundance that only pie can deliver. With this year’s Live Pie Auction behind us, there was no doubt it was a huge success. We never figured out what a Dead Pie Auction would look like, but we were all relieved they decided to auction off the Live Ones.

Beer & Pie: Some folks didn’t make it very far before they devoured their pie. This little group chose to squat right outside the front door and dig in…
(Photo Credit: Deborah Parrish)

“Let them eat cake” only means that they get what’s left over…cake can never compete with a well made pie. For me, I’d eat a pie, crust and all, lick the plate clean and leave the cake behind. I’m deliberate like that. 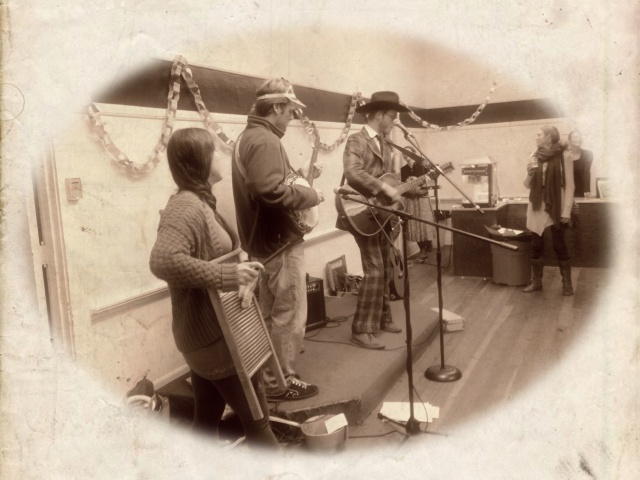 I create to feed my passion. I'm a dreamer, a muse, a mother, a lover, a friend. I'll likely make myself available for an adventure, especially if travel is involved. My passions are many, but my heart is steeped in music. I'm not a musician myself but I consider music a form of worship. I also adore food but I'm not a chef. You'll usually find me in the background cheering and begging for more...the encore. Encores mean just a couple more tunes, or a second helping. Or maybe just dessert.
View all posts by Deborah Parrish Author →
This entry was posted in Friendship, Local Food, Uncategorized and tagged homemade pies. Bookmark the permalink.