When I’m standing on the ground, my hometown is pretty magnificent. Surrounded by farms and ranches, Tomales is a tiny town on the coast of Northern California, a juicy slice of West Sonoma-Marin Heaven and deeply dependent on the economic bounties (and sharply impacted by the inevitable bounces) of agriculture, fishing, and tourism. While I live in the middle of town, I’m still surrounded by the billowy hills and lively vapors from nearby pastures. The quiet calm of my neighborhood awakens the soul. But from the air, it is far beyond breathtaking!

Last night our friend, Jim, invited my Music Man and me to accompany him on a flight to Redding for dinner. Because of threatening clouds from an oncoming squall, we changed our plans at the last-minute to instead head south to Monterey.

Jim’s a pilot, is accumulating his much-needed flight time, and generously chauffeurs his land-locked friends. “I fly, you buy” is the motto of Jim’s Airline, which is not even close to being an even exchange, since we only bought dinner. We felt like rock stars flying off for an evening’s adventure on a whim. He even made an official announcement when we took off and landed, just for me.

On the trip, I carried my little pocket camera, a slick red Nikon CoolPix S6100, to learn how to use some of the manual settings. For years, I’ve enjoyed the automatic functions of the camera, but am recently learning new ways to use it. By increasing the ISO to 1600, suppressing the flash, and using the landscape shooting mode, I was able to capture the amazing full moon that greeted us, welcoming us to Monterey. Nothing prepared me for such a luscious Thursday night dinner, a feast for my eyes, my tummy, and my soul. View more photos here.

Flying over our home, I was struck again with deep affection for the voluptuous hills, festive bays and fertile valleys that dot our local landscape. Last night was ripe with magical photos. Small airplanes offer more opportunity to see the landscape below. It was a fun challenge to try to use my little knock-around camera to record the sky’s jaw dropping performance. I continued using the same ISO/landscape setting which worked great for both the soft, shiny moon and the vivid glowing setting sun.

Not only were we blessed with an eastern Full Moon Rising, but a delightful Pacific Sunset danced with the western clouds. Each side offered its own show, competing for my attention. I ping-ponged from one side of the plane to the other snapping shots of the main attractions before they left the stage.

My love affair with the Bay Area began with a trip across this special bridge. It was Valentine’s Day 1993 when I first crossed her, entering the world of my future while witnessing my life recreated from scratch. Entering Marin County, crossing the bridge from San Francisco, the highway passes through the rainbow-framed Waldo Tunnel, standing as a perfect metaphor for those of us who live here.

There were too many great photos for this post. But without a doubt, this night lands on my Favorite Nights of All Time list. My magical night included a fantastic dinner at Fandango’s in Pacific Grove with two escorts. (By the way, we were all impressed with the food and highly recommend it.) Photos of the dinner were delicious, but not nearly as delectable as the one below, another of my favorites from the night…a view from on high. 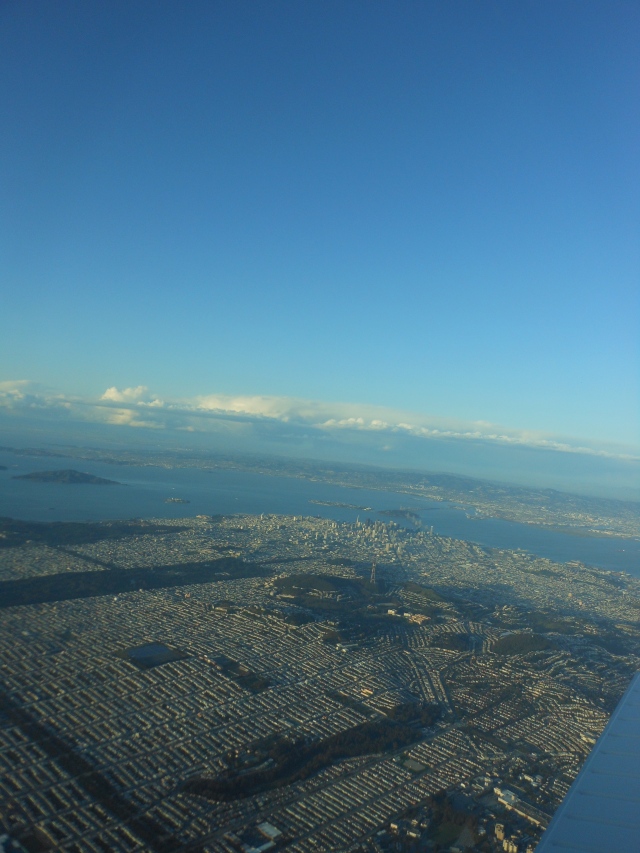 I create to feed my passion. I'm a dreamer, a muse, a mother, a lover, a friend. I'll likely make myself available for an adventure, especially if travel is involved. My passions are many, but my heart is steeped in music. I'm not a musician myself but I consider music a form of worship. I also adore food but I'm not a chef. You'll usually find me in the background cheering and begging for more...the encore. Encores mean just a couple more tunes, or a second helping. Or maybe just dessert.
View all posts by Deborah Parrish Author →
This entry was posted in Local Food, Photography, San Francisco Bay and tagged sky photo, travel, west sonoma. Bookmark the permalink.